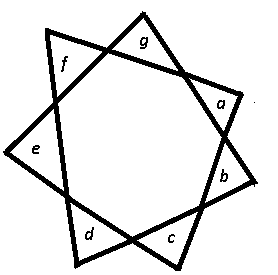 How can you tell the difference between a problem that you can solve with a straightforward application of content knowledge and a problem that requires a more flexible approach?

A good place to start is at the edge of reasonable content knowledge. Let’s say that you’ve been working hard, you feel like you know everything you need to know, your confident that the ratios of the sides of a 30-60-90 triangle will be rattling around in your head when you’re so old that you’re not too sure who the president is, and then… WTF??? You get a problem that, that, that… you don’t even know what to say. You’re on the verge of asking the proctor if this is really the GMAT that you’re taking.

In the figure above what is the approximate value of the sum of the angles a, b, c, d, e, f, and g?

Huh? WTF!? Surely there’s a flashcard that I can’t recall.  It’s that rule about the interior angle measure of the exterior parts of non-convex polygons, right? Is there such a rule?… Do I really need an MBA?

Let’s start with what should NOT to:

You get the idea.

We need to take more flexible approach. We need to exploit the structure of the test. There is only one answer, and because we don’t have a protractor and a ruler it can’t be dependent on this particular figure. The answer will apply to any variation of the figure. In essence the GMAT is telling you that there is a rule that you can use to answer this question. You don’t have to know the rule, and you don’t have to derive the rule. You just need check that rule with an example.

This figure sucks. Let’s use a regular heptagon. That way the angles a, b, c, d, e, f, and g will be equal and we only need to find one of them. 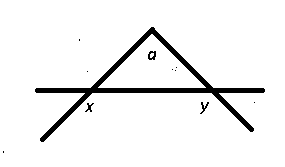 In sum, if you are an experienced GMAT’er, and a problem looks too hard (harder than anything you’ve seen before) it might just be an example of a rule that you don’t know. Use an easier, more convenient, example to confirm the rule.

For more examples of this kind of problem, take a look at these PS problems in the 2016 official guide: