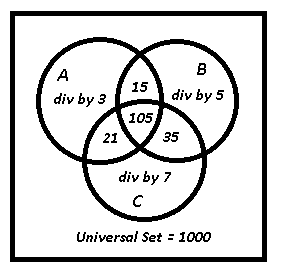 First, we can change things around a bit – let’s find all the numbers that ARE divisible by 3, 5, or 7, and then subtract that number from 1000. We have to careful about integers that are divisible by more than one of our numbers. For example, 21 is divisible by 3 and 7, but we can only count it once. This trick or trap comes up a lot in combinatorics problems. It’s called “double counting.” 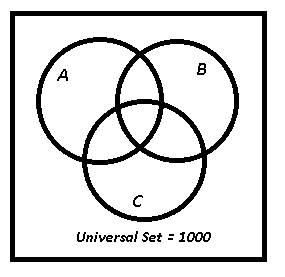 I like to draw these diagrams inside a box so I don’t forget about things that might be floating around outside my sets. This is very important for this problem because the final step will be subtracting the value we get from the total number of elements.

When working with three-set Venn diagrams it’s best to start from the inside and work your way out. All three circles intersect in the center: 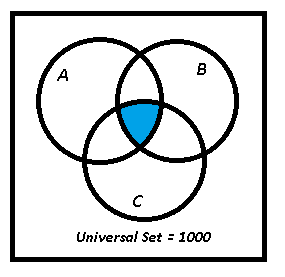 Now we continue to work our way out by looking at the portions of the diagram where two of the three sets overlap: 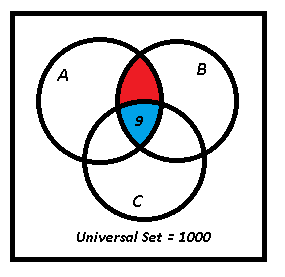 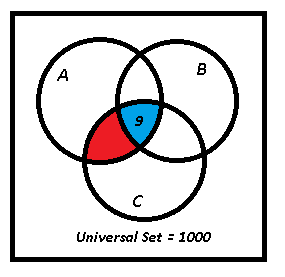 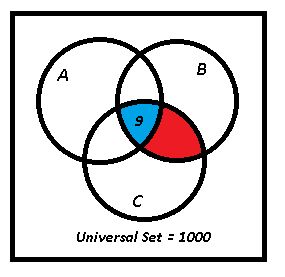 Since we’ve already counted the multiples in the center (the blue part of the diagram) we need to be careful not to count them twice and only find the elements in the red parts of the diagram.

Let’s move from top to bottom: 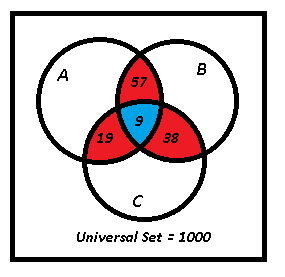 Almost there… remember not to double count the portions of the diagram that are already labeled! 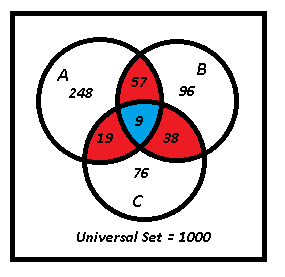 I’m going to leave you with some challenging problems to try on your own. All of these problems can be solved with Venn diagrams

1. How many positive integers less than 1,000,000 are neither squares nor cubes?

2.  Given a random 6-digit integer, what is the probability that the product of the first and last digit is even?